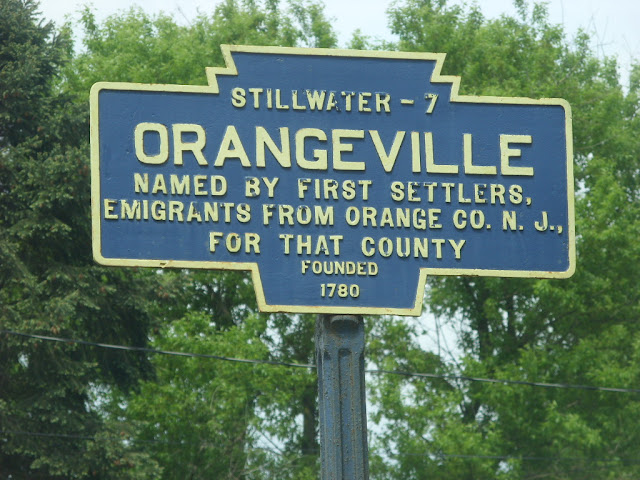 ORANGEVILLE - Founded 1780. Named by first settlers, emigrants from Orange County, N.J., for that county. When I first saw this Keystone marker a number of years ago while driving up PA 487 north from Bloomsburg in Columbia County, Pennsylvania, the mention of Orange County, New Jersey caught my eye as a typo. After all, there's no Orange County in New Jersey, but there is an Orange County just over the border in New York State. However, there were settlers to the town that came from both Orange County, New York and Orange, New Jersey (near present day Newark, New Jersey), so there is a back story behind the typo that makes sense. Orangeville was almost named Knobtown or Rickettsville, after early settler Clemuel Ricketts, an Ohio native who came to the area to develop the land around the base of Knob Mountain as a commercial center. The town received the name Orangeville in 1824, due to the many settlers from New York and New Jersey that came to the area. How to Get There: Sources
Post a Comment
Read more 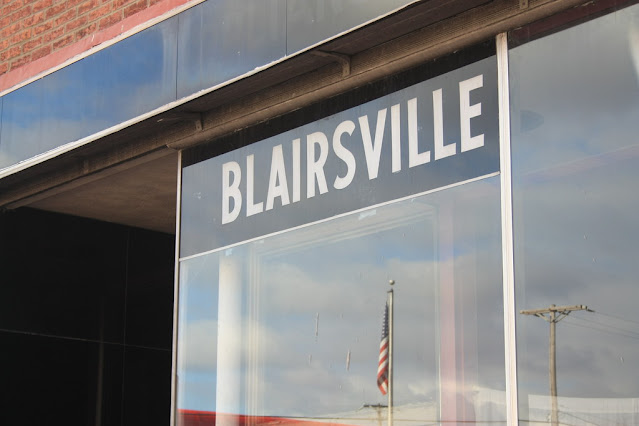 Located in Southern Indiana County on the north shore of the Conemaugh River, Blairsville was settled in 1818 and incorporated in 1825.   James Campbell named the town after John Blair of Huntington .  Because of its location along the Conemaugh River, Blairsville has a storied manufacturing history, plate glass and lumber being two of the larger ones throughout its history.  Blairsville's population peaked at over 5,200 residents in 1930 but has since declined to just over 3,200. The Einstein Block Building -  Built in 1904, it was once an opera house. Blairsville was a key point in the Underground Railroad.  Here, many freedom-seeking slaves continued their journey northward towards Canada with the assistance of over 90 different 'conductors' within Indiana County.  The Blairsville Area Underground Railroad History Center is located at the site of the former Second Baptist Church.  From there, you can embark on a guided journey throughout Indiana County to numerous waypo
Post a Comment
Read more 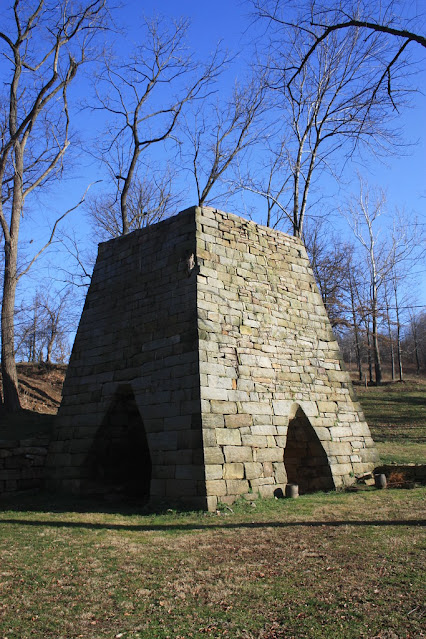 The Mount Vernon Iron Furnance is a historical site just off of PA 982 in Fayette County.  The stone furnace was one of five built by Isaac Meason.  This particular furnace was built in 1795, reconstructed in 1801, and operated until 1830.  The furnace was added to the National Register of Historic Places in 1991.  In 2003, the property around the furnace was acquired by the Bullskin Township Historical Society .   Since then the Historical Society has restored the furnace and improved the surroundings to include a waterwheel, casting shed, and interpretive signage.   Photo taken by post author - December 24, 2011. Further Reading: Mount Vernon Iron Furnace ---Bullskin Township Historical Society Iron Built Fayette County ---Paul Davis/Uniontown Public Library How To Get There:
Post a Comment
Read more 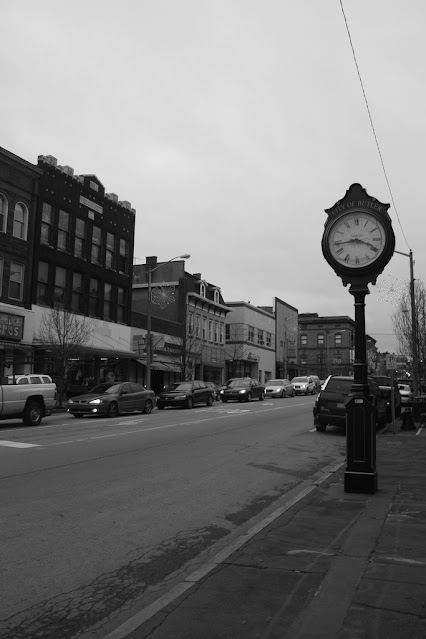 (Editor's note: This feature was originally published on gribblenation.org on December 31, 2011. Feature moved and updated to Quintessential Pennsylvania.) Butler is a unique town of 15,000 located about 35 miles north of Pittsburgh. It is the county seat of Butler County. The County Courthouse (shown below) was built in 1885 and is still in use today. One of the more unique buildings in Bulter is the Butler County Motor Company Ford Dealership .  The dealership's building was constructed in 1918 and has been owned and operated by the Cramer/Glasgow family since 1926. This is the first time I had seen an automotive dealer be housed in a multi-story building like this. The Butler County Motor Company (aka Butler County Ford) has been around since 1918 and was one of the first Ford automotive dealerships authorized by Henry Ford. Walking down Main Street in Butler - there are numerous great older buildings, storefronts, and ghost signs. One of the buildings that caught my eye at
Post a Comment
Read more 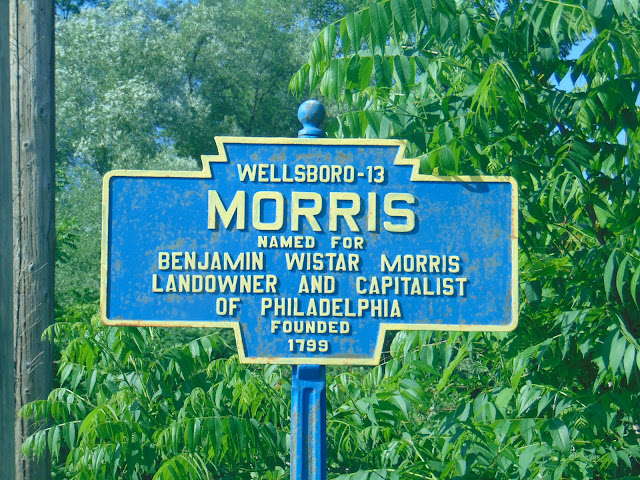 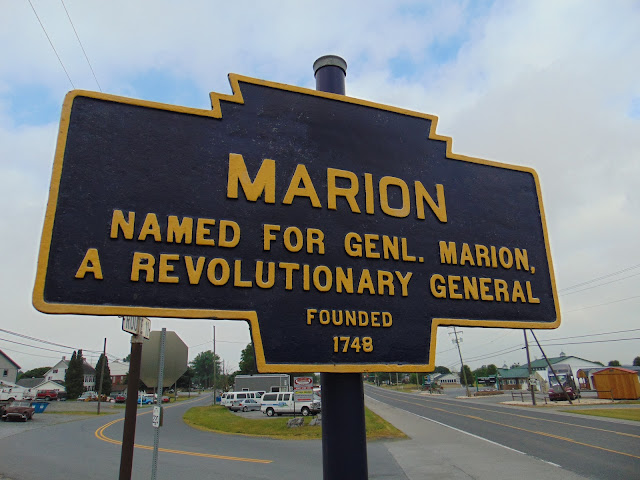 MARION - Founded 1748. Named for General Marion, a Revolutionary War general. Marion was first known as Independence, but by the time a post office was opened in this Franklin County village, the village was known as Marion. You can find Marion at the intersection of US 11 and PA 914, between Chambersburg and Greencastle. How to Get There: Sources and Links: I.H. McCauley (via Internet Archive) - Historical Sketch of Franklin County, Pennsylvania
Post a Comment
Location: Marion, PA 17202, USA
Read more 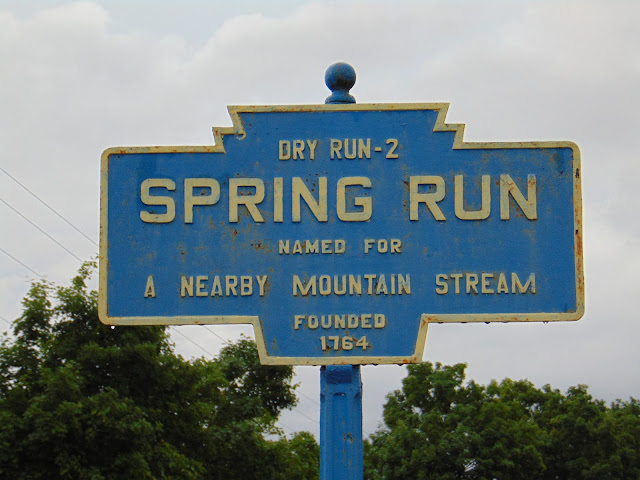 SPRING RUN - Founded 1764. Named for a nearby mountain stream. Spring Run is located in Fannett Township in Franklin County. How To Get There:
Post a Comment
Location: Spring Run, PA 17262, USA
Read more
More posts