Showing posts from 2017
Show all 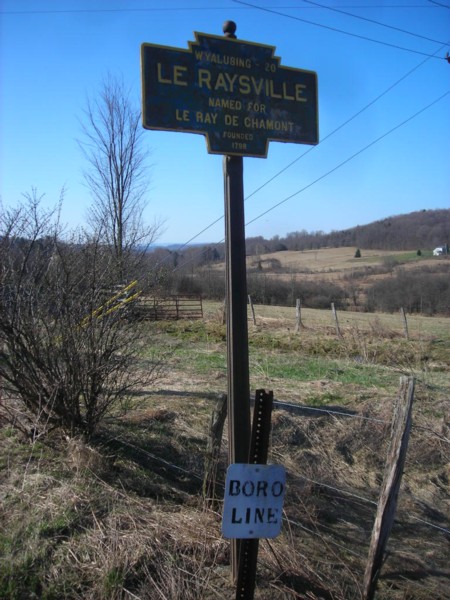 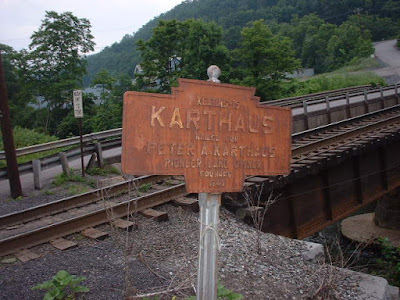 KARTHAUS - Founded 1841.  Clearfield County village and township named after Peter A. Karthaus, who owned much of the land within the township .  Photo taken by Doug Kerr.
Post a Comment
Location: Karthaus Township, PA, USA
Read more 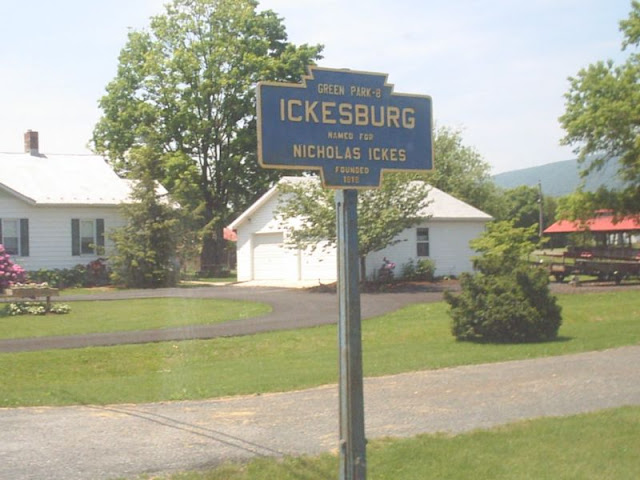 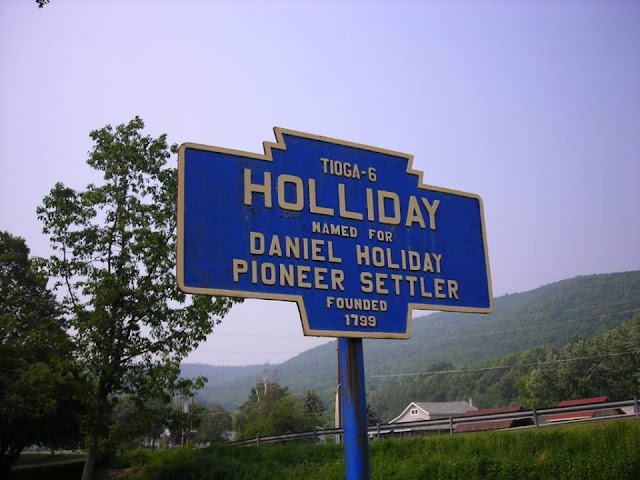 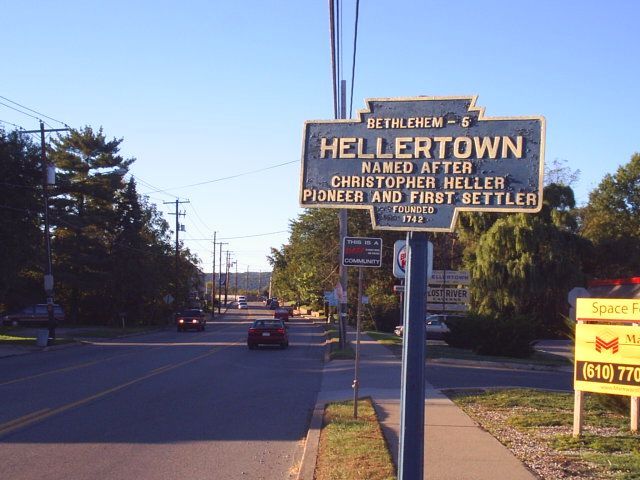 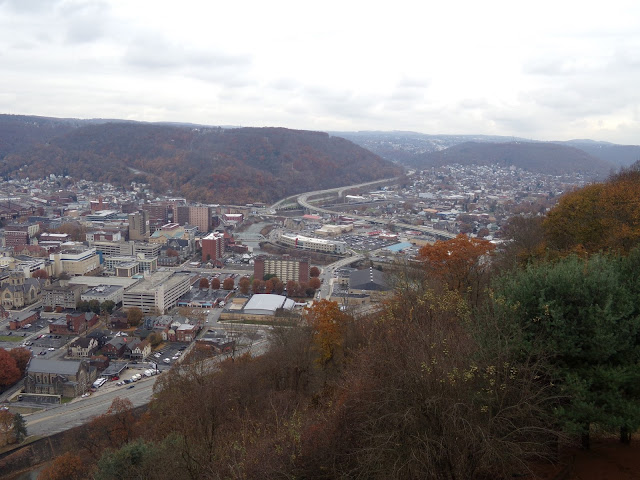 Recently, I had the opportunity to check out the Johnstown Inclined Plane in Johnstown, Pennsylvania . Like the more famous Duquesne Incline and Monongahela Incline in Pittsburgh , the Johnstown Inclined Plane was built with Western Pennsylvania's topography in mind in to carry people and goods between Point A and Point B. Built in 1890 and opened in 1891, just a few years after the devastating Johnstown Flood of 1889 , the incline railway goes up and down Yoder Hill between downtown Johnstown and the Borough of Westmont on the top of the hill. The Johnstown Inclined Plane features a double track of rail with two cars permanently attached to steel cables, counterbalancing each while in operation. As one car rises, the other is lowered. Power is only needed to lift the net weight. The grade of the Inclined Plane is quite steep, at just over 70% as it travels 896 feet up the hill. For a thrill seeker like myself, I was also impressed by the scenic views of Johnstown and the
Post a Comment
Location: 711 Edgehill Dr, Johnstown, PA 15905, USA
Read more 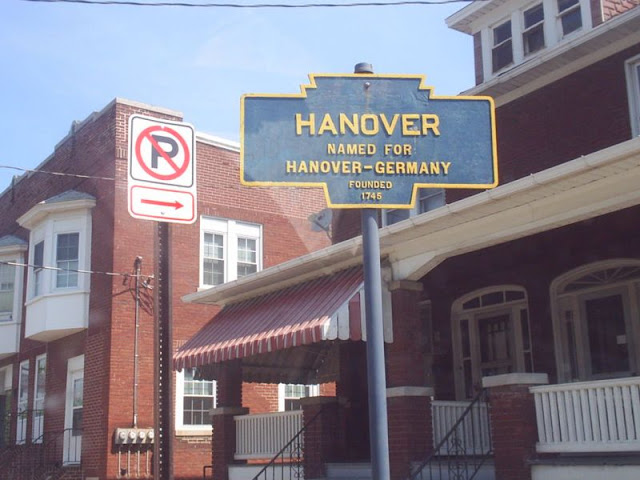 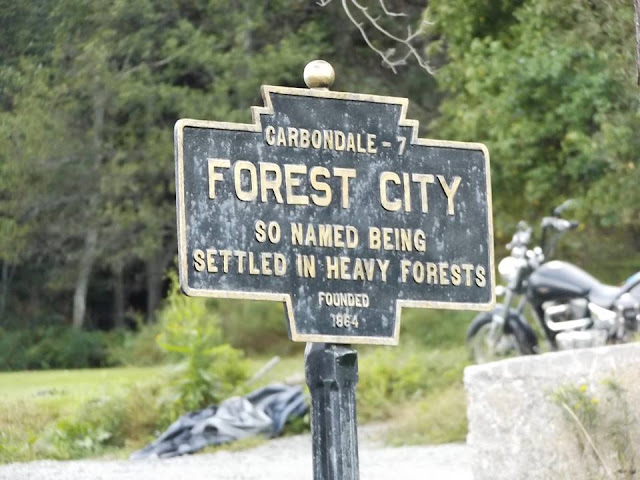 FOREST CITY - Susquehanna County town founded in 1864.  William Pentecost, who settled the area, named the town after the surroundings of a dense forest .  The town had a peak population of just over 6,000 residents in 1920 but has declined to about 1,700 residents today. Photo taken by Doug Kerr.
Post a Comment
Location: Forest City, PA 18421, USA
Read more 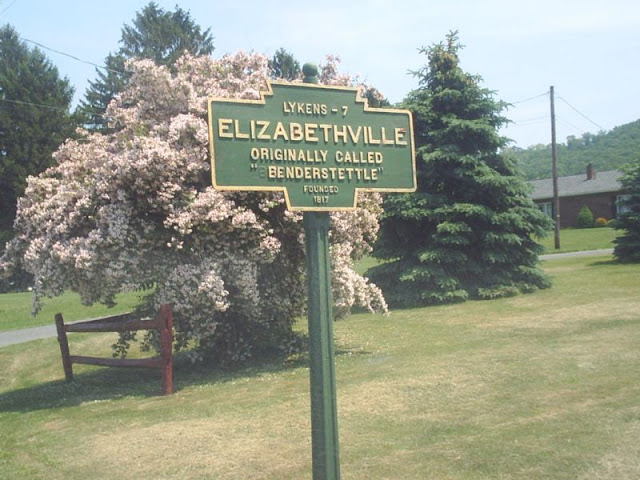 ELIZABETHVILLE - Founded 1817.  Originally named "Benderstettle".  The town was renamed to Elizabethville in honor of the Bender's daughter, Elizabeth.  The Dauphin County town of over 1,500 residents prides itself on being " The Star of the Valley ." Photo taken by Doug Kerr.
Post a Comment
Location: Elizabethville, PA 17023, USA
Read more 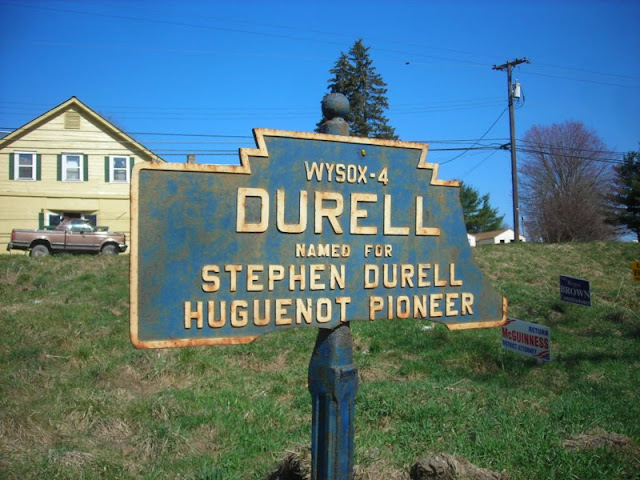 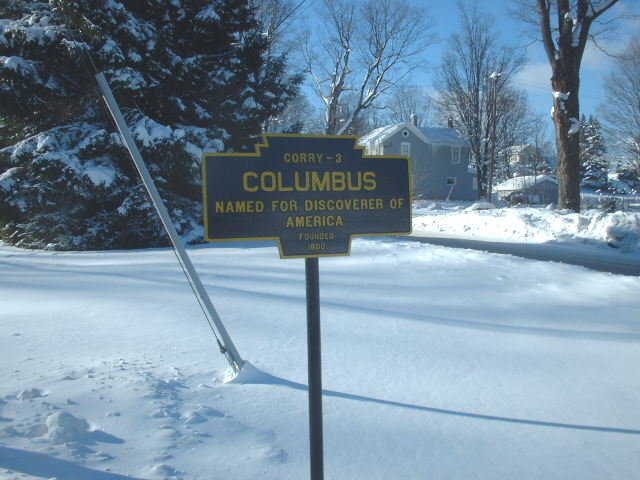 COLUMBUS - Founded 1800.  Like many other towns that share the name nationwide, the Warren County community of Columbus was named after Christopher Columbus. Photo taken by Doug Kerr.
Post a Comment
Location: Columbus, PA, USA
Read more 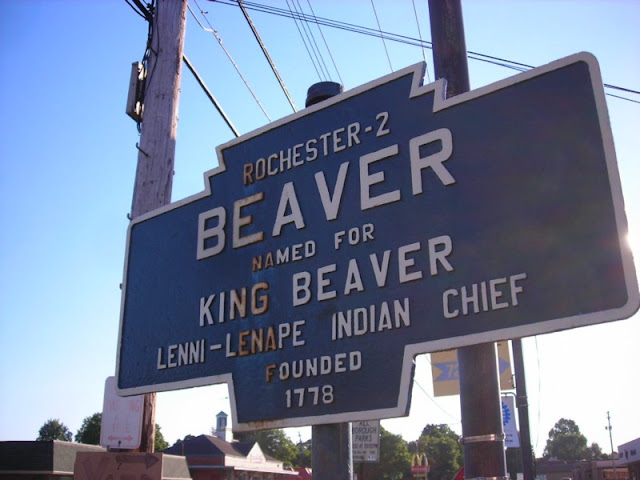 BEAVER - Founded 1778.  Named after King Beaver of the Lenni-Lenape Indian tribe.  Lenni-Lenape are known to us as the Delaware Indians and "Lenni-Lenape" means "true man" or "common people". Photo taken by Doug Kerr.
Post a Comment
Read more 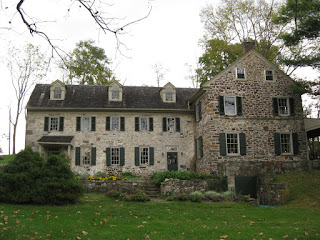 Among the picturesque countryside of Lancaster County is a historic iron forge called Poole Forge. Founded around the time of the American Revolution by a Welshman named James Old, Poole Forge produced armaments and other iron goods by various owners for a burgeoning nation from 1775 to 1852. These days, Poole Forge is a park, has a covered bridge that was constructed over the Conestoga Creek in 1859, hosts weddings from some of the remaining original buildings and a chance to learn about early industry in this part of Pennsylvania. One of the remaining historic buildings at Poole Forge. Part of the historic mansion. A horse and buggy gives Poole Forge a quaint appearance. The covered bridge over the Conestoga Creek, constructed in 1859. Lime kiln used for iron production during the industrial heyday at Poole Forge. Sources: Historic Poole Forge - About Us How to Get There:
Post a Comment
Location: 1940 Main St, Narvon, PA 17555, USA
Read more 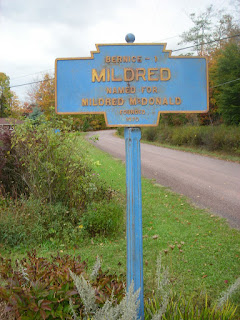 Pennsylvania has a good number of uniquely named villages, townships, boroughs and cities. On PA 487 in Sullivan County, between Dushore and Ricketts Glen State Park is the little settlement of Mildred. It was founded in 1870 and named for one Mildred McDonald. I am finding it interesting that Mildred is a mile down the road from Bernice. I wonder if they were somehow related. Listed below is a link to old photos to show what Mildred (the town) looked like in the days of yore. Sources & Links: (1) Rootsweb. " Mildred, Sullivan County, PA. ." Accessed on October 17, 2017. How to Get There:
Post a Comment
Location: Mildred, PA 18632, USA
Read more 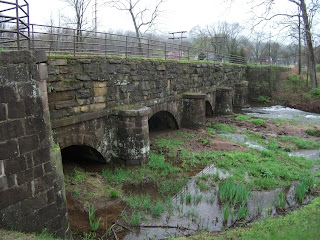 Having spent a significant chunk of my life residing near New York State's canals, such as the famous Erie Canal and the lesser known, yet still important Champlain Canal, I've become interested and acquainted with historic canal infrastructure. During a trip I made into Pennsylvania in April 2011, I stumbled across the Allegheny Aqueduct Historic Park just outside of Reading, in the town of Gibraltar, so I had to check it out. The Allegheny Aqueduct was built in 1824 as part of the Schuylkill Canal, which went from Schuylkill County to Philadelphia. The aqueduct was constructed to allow boats to travel across the Allegheny Creek, which could not be incorporated into the canal itself. At 112 1/2  feet long, the aqueduct features five stone arches as it crosses over the creek and was in use until 1919. These days, the aqueduct is part of a county park and is listed on the National Register of Historic Places. Sources: Allegheny Aqueduct Historical Park - County of
Post a Comment
Location: 1130 Old River Rd, Birdsboro, PA 19508, USA
Read more 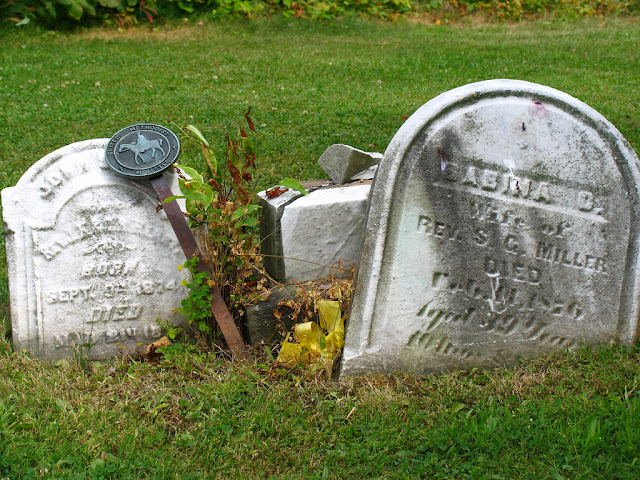 Throughout Pennsylvania there are many small cemeteries.  Some are rural and some are in many of the old towns and villages that are throughout the state.  The Fells Church Cemetery in Rostraver Township, Westmoreland County is one of them.  Established in 1785 on the grounds of Fells Methodist Church , Fells Cemetery is the final resting place to those who fought in the American Revolution, Civil War, World War I, and World War II.  Three centuries of Pennsylvanians are buried here. Both Fells Church and the village of Fellsburg have a long history.  Fellsburg is located within Rostraver Township which is one of the original Westmoreland County townships dating back to 1773.   Fellsburg is named after Benjamin Fell , and upon land donated by George Washington, Fells Methodist Church was built.   Known as " The Lighthouse on the Hill ", the historic stone church that was built in 1834 still stands; however, the congregation moved to a new building in 1967. Coming
Post a Comment
Location: 800 Fellsburg Road, Belle Vernon, PA 15012, USA
Read more 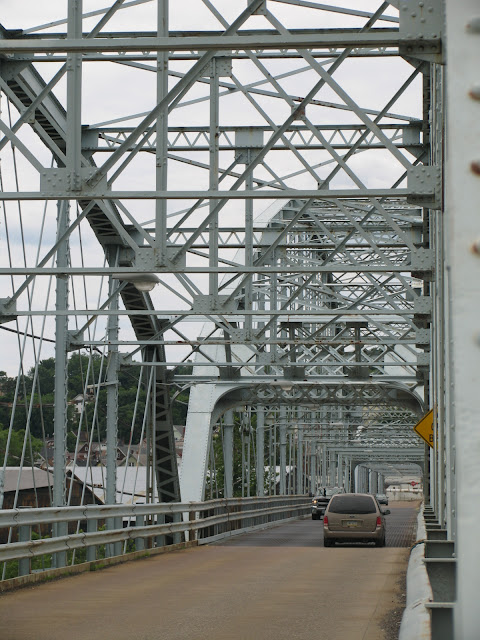 The Donora-Webster bridge was like many bridges once found in Southwestern Pennsylvania - old, narrow, and full of character.  Built around the turn of the 20th century, this bridge did more than just connect two Monongahela Valley towns, it had a unique charm that depending on who you spoke to - was either soothing or downright scary! The Donora-Webster Bridge near the end of its service to vehicular traffic.  10 days after this photo was taken the bridge was closed to traffic after a routine bridge inspection deemed the bridge extremely unsafe. Growing up in Mon Valley, there are two things I recall about this bridge.  The steep incline onto the bridge from the Webster side (shown below) and the hum of the narrow open-grate bridge.  On a wet, snow or icy day, the thought of crossing the bridge would put a fright into many local drivers.  However to those that crossed the bridge daily, the unique sound of the bridge meant that they were home .  Built in 1908, the five span t
Post a Comment
Read more 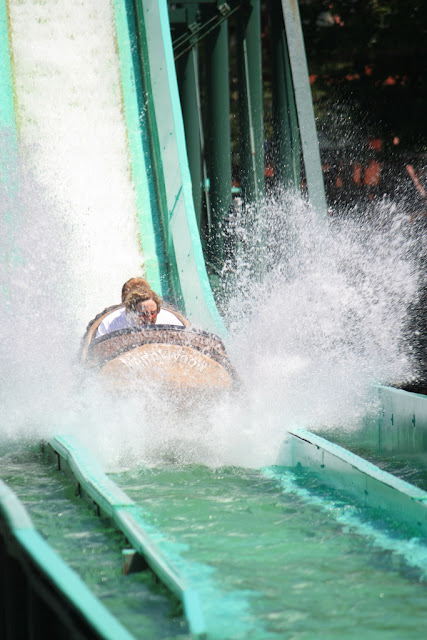 Like many Pittsburghers (present or former), I was surprised when I found out today that Kennywood will be retiring the Log Jammer ride after 42 years of service.  The last chance to ride this Kennywood mainstay is this Sunday, September 17th.  Kennywood intends to replace the Log Jammer with a new ride, rumors have it as a new roller coaster or a return of the beloved Turnpike ride.  The log chute water ride first opened in 1975 and was the park's first million dollar ride.  It was one of three water rides within the park - the Pittsburgh Plunge and the Raging Rapids being the other. Compared to the park's other two water rides, the Log Jammer was the most gentile. The ride was a 1,650 foot out and back consisting of two drops - a 27 foot plunge about halfway through and the final 53 foot drop which was the main feature.  The ride was a great family ride for those that didn't want to get drenched but still wanted to cool off on a hot summer's day.  Most of the
Post a Comment
Read more 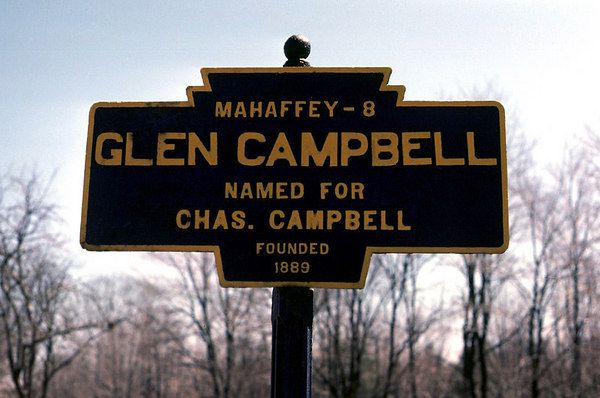 (Fred Yenerall, 1975) With the recent passing of legendary musician, Glen Campbell, it's only fitting to share a post about the Pennsylvania village that shares his name.  The tiny Indiana County village of about 250 was founded in 1889 and named after Cornelius Campbell who was a superintendent with the Glenwood Coal Company. The borough flourished in the late 19th and early 20th century with over 1600 residents at the time of the 1900 census.  However, the town was hit hard by the Great Depression and never recovered.  The more famous Campbell made a surprise visit to Glen Campbell in 1971 giving the town its own five minutes of fame.
Post a Comment
Location: Glen Campbell, PA 15742, USA
Read more 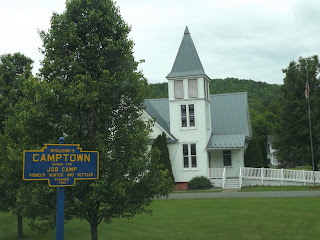 Camptown was originally settled in 1793 by Job Camp , an early settler and carpenter by trade who came from Connecticut. Job Camp built the original homes that made up Camptown and as of 2004, one of his original barns that he built in Camptown was still standing. There are a few homes and a church of more recent vintage that made up today's settlement. Camptown, Pennsylvania is located some five miles north of Wyalusing in eastern Bradford County at the junction of PA 409 and PA 706. The small town may be best known for the inspiration behind Stephen Foster's classic American folk song Camptown Races .  In modern times, instead of a minstrel song, Camptown Races is the name of a local running race that mixes road and trail running. Sources & Links: (1) Tom Camp. " Person Sheet for Job Camp ." Accessed on August 8, 2017. (2) University of Pittsburgh. " Stephen Foster Biography ." Accessed on August 8, 2017. (3) ThoughtCo. " The '
Post a Comment
Location: 3959 PA-409, Wyalusing, PA 18853, USA
Read more 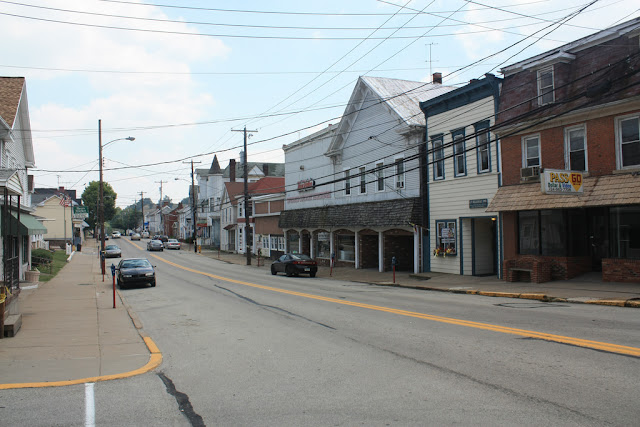 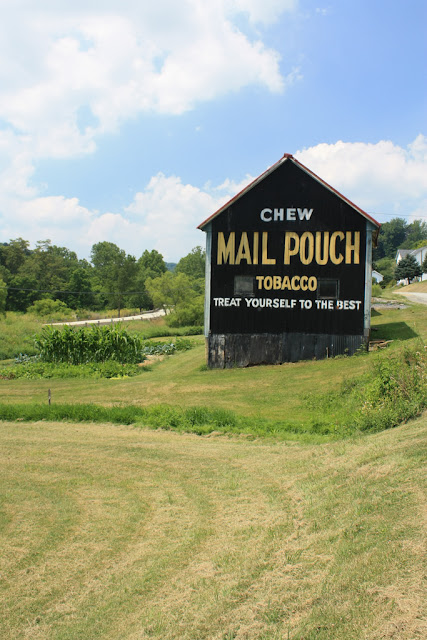 One of my favorite subjects are the old Mail Pouch Tobacco Barns that can be found throughout rural Pennsylvania.  This Mail Pouch Barn is located on PA 18 near Old Concord .
Post a Comment
Read more 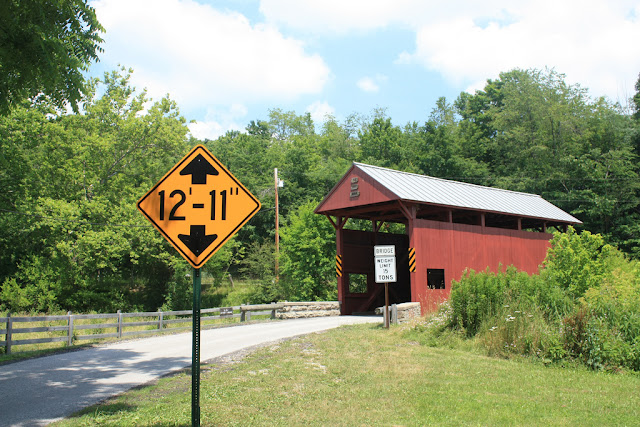 The Day Covered Bridge is similar in style and length to many other Washington County covered bridges.  The 36 and a half foot queenspost bridge over Short Creek can be easily accessed from PA 18 between Sparta and Prosperity.  The bridge was built in 1875 and in 1979 was added to the National Register of Historic Places.  In 1999, the bridge was closed until a rehabilitation project in 2003 enabled the bridge to once again carry vehicular traffic. Bridge Specs: Number: 38-63-12 Built: 1875 Design: Queenspost through truss Length: 36 1/2 Feet Crosses: Short Creek Sources & Links: Washington & Greene County Covered Bridges Driving Tours ---Washington & Greene County Tourism Promotion Agencies
Post a Comment
Read more
More posts